*COMMUNIQUE ISSUED AT THE MEETING OF THE PEOPLES DEMOCRATIC PARTY ON MARCH 28, 2022*

The Peoples Democratic Party (PDP) at its stakeholders’ meeting held on Monday, 28th March, 2022 at the Party’s State Secretariat, Alagbaka Akure deliberated on recent developments within the Party, Ondo State and the country at large.
The party observed that Nigeria had been driven to the precipice by the APC and that it is only a united, strong and forward-looking PDP that can rescue and rebuild Nigeria. To so do, the party recommends among others that:

1. That the party should leverage on its strength and the influx of new members to reconfigure itself and reorganize for unity and collective progress.

2. That the party should work beyond fissures and cleavages and organize as one, towards rebuilding and reclaiming Ondo State and Nigeria from the underperforming APC.

3. That all leaders should mobilize from the unit, ward and local government area levels towards the victory of the party in subsequent elections.

4. That the State Executive Committee should create level playing grounds for all irrespective of their length of time of membership.

5. And that members should subscribe according to their capacities by making human and material contributions for the growth and upliftment of the party.

The stakeholders’ meeting which was chaired by the Chairman, PDP, Ondo State, Hon Fatai Adams had Dr. Olusegun Mimiko, Chief Agboola Ajayi, esteemed party leaders, former State Chairmen of the party, Hon Ebenezer Alabi and Hon Engr Clement Faboyede, Member of the National Assembly, Hon Kolade Akinjo, former Speaker of the State House of Assembly, Rt. Hon Jumoke Akindele and current members of the State Assembly, State Executive Committee members of the party as well as select leaders from the 18 Local Government Areas among many other leaders in attendance. 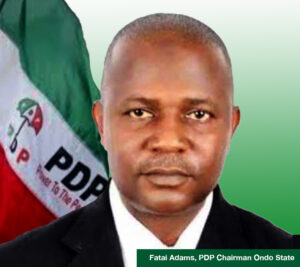