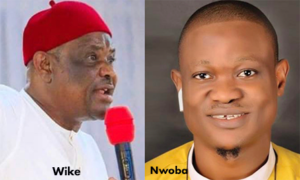 The Publicity Secretary of PDP in Ebonyi State and also a brother In-Law to Governor Nyesom Wike of Rivers State Hon. Nwoba Chika Nwoba has cautioned him of his excesses on public domain lately after he lost the bid as the Presidential candidate of PDP primary election to Alhaji Atiku Abubakar.

In his letter to his brother-inlaw below, Hon. Nwoba painted a picture of a depressed state Governor Wike is waiving for himself after leaving office in few months should he continue with the current hopeless pursuit of a lone ranger fighter, he admonished him to seize the little window of opportunity ahead of him and listen to the words of wisdom.

My dear brother in-law, Barr Nyesom Wike, I bring you greetings from Amangwuru village of Ekpelu community in Ikwo LGA of Ebonyi State. There’s no need asking about your health and feelings; it’s showing on your physiological construct. You are an Ikwerre man; my wife is an Ikwerre woman. I am your brother in-law and qualify to address you. I am Nwoba Chika Nwoba, Publicity Secretary of PDP in Ebonyi State!

Sir, take political life easy! Nigeria doesn’t belong to you as an inheritance. Rivers State doesn’t belong to you as an estate. You are drying up by the day due to the politics of do or die you have engaged yourself for some months now. You have only seven months to quit office as Governor of Rivers State. Your influence will start phasing away after the governorship election in March, next year.
It’s then the reality of power transition will begin to dawn on you. Your erstwhile appointees will forget about you immediately. Your contractors will leave you. The number of your political associates will decrease drastically. All the attention will be focused on the new Governor and Government of Rivers State. Your name soon grows decrepit in the ears of the citizens the cacophony of your verbiage once reverberated. Everything about you will become old-fashioned. Your clangorous diatribes will fall in diminuendo.

Gov. Wike, brother in-law, Dr Peter Odili was Governor in Rivers State. He contested presidential ticket of PDP in 2007, pushing in Rivers’ fortune into the surreal aspiration. He lost out. He didn’t go insane about it. He didn’t demand anyone’s neck.
Hon. Chibuike Amaechi was Governor in Rivers State. He contested the presidential ticket of the APC in 2022 and came second as yourself. As Minister of Transportation, he focused transport infrastructure attention towards the North, thinking they would cede the ticket to him. They didn’t. In 2015, he pushed in the Rivers’ money to the struggle of establishing the APC and making it win the presidential election. Now that he has lost the ticket of the party, he hasn’t called for anyone’s jugular. He’s maintaining silence, pursuing his Law degree in the university.
Getting to your turn now, you are going about it in most rustic of manners. The negative effects of the vengeful struggle you are pushing are showing on your outlook. It’s giving your brothers in-law a dire concern.

Sir, Northern Nigerian people don’t know friendship or camaraderie when it comes to electoral politics. Gov. Tambuwal showed you that at the PDP presidential primary election venue. You didn’t expect it from him. He stepped down for Atiku Abubakar in the interest of the North. Wike, would you have stepped down for a Southerner if it had come to that option? You wouldn’t, of course! Even at that, Gov. Tambuwal didn’t do anything aberrant in politics. His action instead, shows how united and resolute the Northern political elite are in pursuance of central power.
If truth be told, you should not have contested the ticket against the South East. It was because of you that Peter Obi left the PDP. You have since after the exercise been engaging yourself in vengeful talk exercise. You gave out 25 buses to Cross River PDP candidates and cash last week. You have donated N300 million to the Lagos State APC’s Gov. Sanwolu just to spite PDP. Lagos is times two richer than Rivers. One wonders if the wealth of the state of Rivers is your personal estate. To further press home your frustration, you derecognised Barr Celestine Omehia as former Rivers State Governor as a result of his not following you sheepishly. You recognised him earlier using the House of Assembly even as that shouldn’t have been done in the first place. You have been witch hunting the lives and businesses of Rivers State politicians opposed to your journey towards perdition. You have voiced out things only a drowning life could do. You are trivialising the glorified Rivers governorship concept by virtue of your recent dishonourable invectives.

Dear brother in-law, may you get over the defeat hangover that has kept you in the cold, making you bleat as if an inheritance of yours or destiny has been tampered with. What you are playing is no longer politics. You are becoming an aimless villain. Power, they say, is transient. You will understand all you have been doing once you pull off the governorship garb adorning your body now by next year. Even the young man you work towards making Governor will disappoint you once he has assumed office as your kind of person will like to remain in power by surrogacy. It doesn’t work out in most cases. You will soon be alone. The people you are hounding today for no social reason will use you like a plaything should they succeed in 2023. You may regret taking the route you are taking now with arrogance. You still have a little time gap to retrace your way for the sake of your sanity and political tomorrow. You now look like an octogenarian in your fifthies due to the unnecessary fisticuffs you have engaged yourself into. Rivers votes don’t belong to you. You can’t control them insofar as you think you could. The new electoral act has made it impossible for you to dictate the tune in February, 2023, dear brother in-law, Barr Nyesom Wike, Governor of Rivers State!